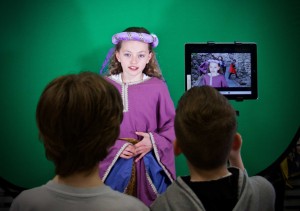 g arts, specifically drama, in the curriculum, ahead of the MP debate regarding the impact of the EBacc curriculum.

Many of our projects use both performing and creative arts, linked with digital skills, to engage children with curriculum areas and heritage.

Our ethos is centred around our values: Knowledge leads to experience; Experience leads to creativity, Creativity leads to innovation; Innovation leads to knowledge.

Creativity isn’t just about drama or dance, or even music, it is about allowing our minds to work in a new way, and see things differently. It is about using the foundation of knowledge, to experiment and push boundaries.

Creativity applies to all areas of the curriculum and we hope that in the debates, MPs will remember that without creativity, there can be no innovation, and without innovation, the world stands still.

To quote neuroscientist Thomas Sudhof, Nobel prize winner for Physiology or Medicine in 2013:

“The qualities I learned from my training in classical music, in particular in bassoon, are multifarious and varied. Let me list a few. First, the value of disciplined study, or repetitive learning, for creativity. You cannot be creative on a bassoon if you don’t know it inside out, and you cannot be creative in science if you don’t have a deep knowledge of the details. Second, the value of good mentorship. A good teacher challenges and criticizes, but does not chastise or put down a student, no matter what. Third, the role of performance in a profession. As a musician, you practice for thousands of hours to play for a few minutes—but when you play, you have to not only recapitulate the learned material, you have to expand on it and you have to communicate it to the audience. In science, it is basically the same thing—it is in the end a process which also depends on communicating with an audience and accepting and responding to its feedback. Finally, I learned to value traditions as a musician, but at the same time the importance of trying to transcend tradition. The tradition is the basis that allows you to progress, the starting point, but it cannot become a limitation, because then both in music and in science creativity and progress end.”