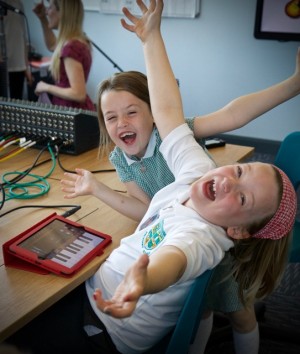 250 non-musicians perform in the battle of the bands competition using mobile learning technology, thanks to Elsium’s Strike A Chord programme.

Using the iPads and the app Garageband, the children are able to perform as a band performing all instrumental parts; with each school creating its own band. The programme has enabled children from all backgrounds and abilities to engage with music, and they will perform in front of a large live audience at the battle of the iPad bands in July.

Pupils from the schools include mainstream non-musician pupils; gifted and talented pupils; and pupils with social, economic or mental health issues, and physical disabilities.

Elsium’s Managing Director, and concept creator of iPad bands for education, David Kirtlan said: “As well as mainstream non-musicians, pupils that would be traditionally excluded from music education due to a learning difficulty or physical disability have also participated and thrived as key members of the bands. 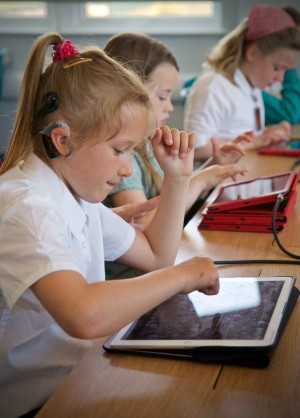 One pupil taking part is profoundly deaf, and so for her to be able to play a traditional instrument would have been considered to be very unlikely, however, using the technology, she was able to “feel” the music with one hand placed on the speaker and her other hand playing the part on the iPad; and once confident in playing, she no longer needed to keep her hand on the speaker, using it only check the beat every now and then. Another pupil has selective mutism, and despite this, he performs successfully as a singer in his school iPad band.

The Strike A Chord programme is about engaging all children with music, including SEN pupils who feel they are unable to participate. No child should miss out on the wider benefits of music education, and as school and local authority funding is reduced, using technology already in schools in this way will enable schools to offer a music provision for all pupils. For many pupils, participating in the iPad band is the first stage of engagement towards learning to play an actual traditional instrument.”

David Kirtlan, is one of the UK’s most popular music education consultants, and was one of the UK’s first Apple Distinguished Educators. His previous large scale iPad bands include creating and performing the iPad band at the BETT Show in 2015 and 2016. He has been creating iPad bands, and bringing them to the consciousness of music teachers, since the iPad was first introduced to the world in 2010.

Susie Jones, music co-ordinator and teacher, said ”Pupils are integrating the dimensions of music on a practical, relative level which is engaging to some pupils that are less engaged with instrumental lessons and in class music.  Other year groups in the school are [now] wanting to access the iPads and explore garage band, which is encouraging and continues to raise the ethos of music within the school community.”